Our wire rope sling tables should be used for guidance only.  If you are unsure about how to calculate the safe working load for your slings, please contact our training department.

K T is a factor which allows for the efficiency of the termination (0,9 for ferrule-secured eyes; 0,8 for spliced eyes)

Z P is the working coefficient and has the value = 5;

When single leg slings are used either alone or in pairs, the Safe Working Load (SWL) can be affected.

Some examples are given here.

A basket hitch should only be used when the sling is passed through part of the load and the load is balanced on the sling. 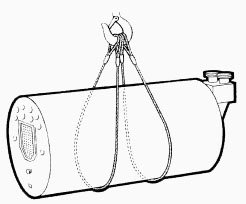 Method using a single sling in place of an endless sling where a ‘bight’ is required. 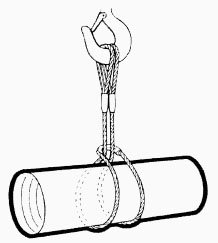 Note how the double wrap grips the load and helps to prevent it from slipping sideways out of the slings. 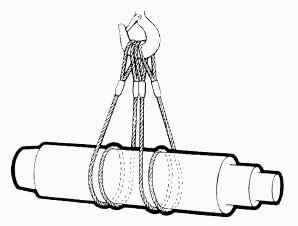 N.B. Maximum angle between legs is 90º 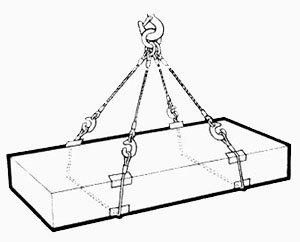 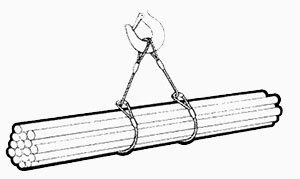 Note that the working load limits shown are based on the assumption that soft-eyes of single-part slings are used over bearing points of not less than twice the normal diameter of the rope. All sling ropes must be ordinary lay.  The Safe Working Load will normally be equal to the Working Load Limit but in some circumstances it may be less e.g. If the sling is used in choke hitch SWL=WLL x 0.8 .BS EN 13414-1 covers only those sling assemblies that have legs of equal nominal length, diameter, construction and tensile grade. While sling assemblies with legs of unequal length may be made up generally in accordance with the requirements of BS EN 13414-1, it must be stressed that their rating requires special consideration by a competent person.

In all cases, where hooks or shackles are used, the WLL of the hooks and shackles shall not be less than that of the leg to which they are attached.

When using multi-leg sling assemblies, remember that increasing the angles between the legs will increase the load in each leg. Examine all slings before use, and

discard any that are defective. Slings which are found to be unfit for use should be destroyed by cutting them up - not put on a refuse dump. ‘Hooking back’ to the leg

of a sling is not recommended. The Safe Working Load of slings is affected by the method of usage. Check that the crane hook is positioned over the loads centre of gravity

to prevent swinging when the load is being raised.  Correct signals, according to the recognised code, should be given to the crane driver. The signals must be given by

the person responsible for the lift and nobody else.  Keep wire rope slings away from welding and flame cutting operations. The Law requires that all lifting

tackle must be examined by a competent person at regular intervals. This includes the wire rope slings.  Slingers should not stow away slings and regard them

as their own private property, as this could lead to them being overlooked at inspection time.

Certex can manufacture slings to DNV 2-7.1 in our approved facility in Montrose.