How to decide which is the best assessment method for each defect?

The visual inspection can be defined as the first assessment method for a correct metallic wire rope evaluation. The method consists of deeply looking at the rope, searching for deterioration modes and reporting the results on a document. In all the updated versions of the ISO4309 , the visual inspection has always been considered the principal or the only inspection tool.

It must not be confused with the simple search for macro-defects, it is a very delicate operation and should be performed by a competent person. A good technician must recognise different defect typologies such as broken wires, valley breaks, waviness etc. This kind of inspection can take hours, depending on the rope and inspection conditions.

How can a competent person find the defects in the rope?

Some defects are usually visable and easily recognisable with a visual inspection, for the most hidden ones an MRT is necessary.

The picture below shows a core protrusion, it can be caused by shock loading aswell as improper installation. Rotation - resistant wire ropes on hoists must be installed with extra care and proper handling to prevent rope damage during installation.

By introducing twist or torque into the rope, core slippage may occur and might protrude from the rope. The protrusion is an example of macro defect and it is enough to discard the rope. 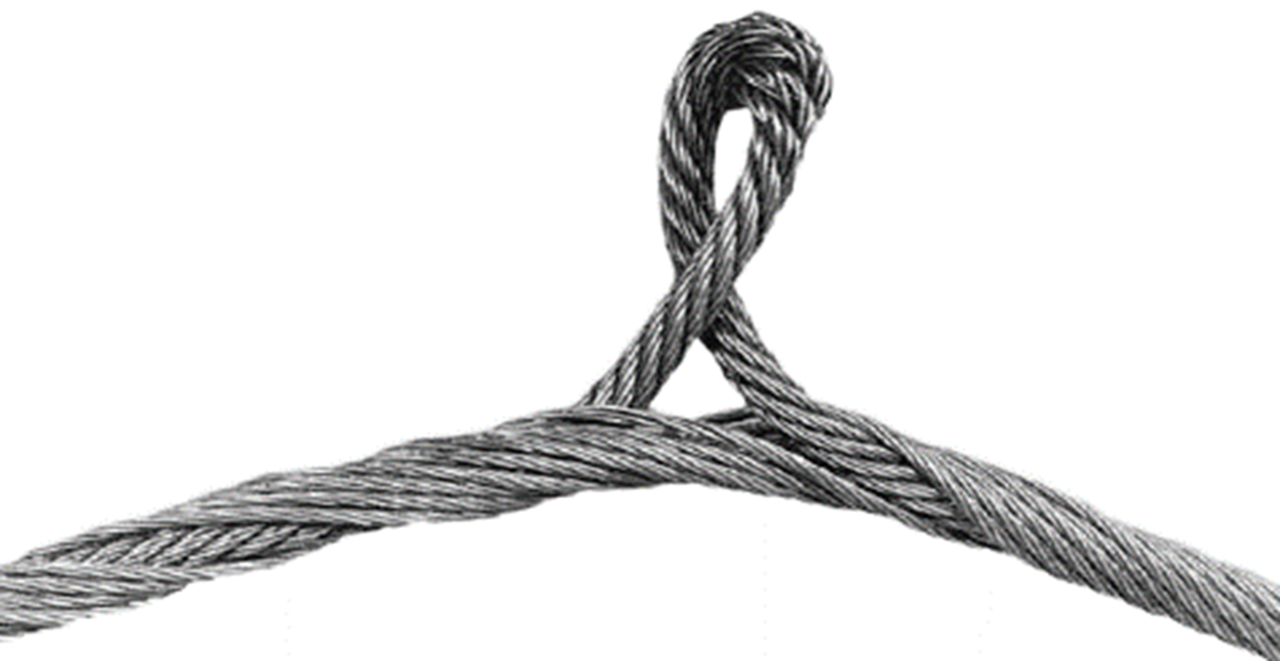 In the picture below we can see a group of external broken wires, the square ends of the wires suggest there are fatigue breaks

Hoist wire ropes are subject to repetitive bending over sheaves, which causes the rope to develop cracks in its outer wires. The smaller the sheave is in relation to the diameter of the wire rope, the higher the bending fatigue. Once broken wires start to appear, they create a domino effect and more will appear.

This kind of defect can be identified through a deep visual analysis, however grease, lack of sunlight and inaccessibility can often prevent detection, whereas the MRT would identify these.

A valley break is a special defect and is  difficult to identify, as the breakpoint is usually located in the valley region between the strands. Valley wire breaks typically occur due to inter-strand nicking, deriving from the forces between strands whilst the rope is under bending load, during spooling and when running over sheaves. This phenomenon is usually dangerous because the presence of valley wire breaks is a strong indication of internal deterioration within a wire rope.

Flexing the rope exposes hidden broken wires and whilst doing so, you may hear a cracking sound from inside the wire rope. As bending the rope is not always possible, MRT is a helpful solution to detect the breaks.

In some types of wire ropes, most defects are internal. In low-rotational ropes this happens frequently and the standard ISO 4309 helps describe this phenomenon.

The image below shows a low-rotating wire rope before and after the external layer of strands have been removed. On the left side, the external layer has no defect, whilst on the right side the internal layer is full of broken wires. In this case visual inspection isn't the corect method to evaluate the rope condtion, an MRT is needed.

Internal corrosion is not as easy to find, it can be visually detected when a red powder is coming from the inter-strand zones of the rope. Unfortunately, this is not enough to evaluate the rope conditions as rust can also come from other parts of the plants such as sheaves and drums. This kind of defect can be critical in real applications, when a suspected internal corrision appears, MRT is the better solution.

When is MRT suggested?

The Magnetic Rope Test is suggested every time the Visual Inspection is not enough for a correct wire rope evaluation.

The below image shows a diagram corresponding to a magnetic rope test in a marine environment. The entire rope was covered with lubricant and was very difficult to perform an in-depth visual inspection. The visual inspector did not find any problems and the rope was declared in good condition, however once an MRT was performed it highlighted corrosion.

The diagram reveals a very dangerous situation, as there are zones with a high peak concentration which means the rope is deeply corroded. The rope has been immediately removed and a breaking test has been performed. The results show the residual load capacity was a less than 1/3 of the nominal one (125kN vs 400kM).

It's important to focus on the meaning of 'visable', which strongly depends on the inspection conditions, grease, speed and operator's attention. For external defects an MRT is not mandatory, but it's the only tool that can provide a quick and accurate assessment of the whole rope condition.

For internal defects, MRT is the only method claimed by regulations (EN12927, ISO4309). When it is possible to perform Magnetic Rope Testing the inspector must evaluate the rope conditions by basing their assessment on the visual inspection and their own experience. To have a clear vision of all the different modes of deterioration and the relative assessment methods we suggest checking ISO4309.